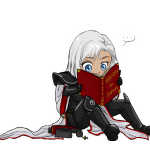 Hi ZIX. I'm sorry it took me so long to get back to you. I was on vacation. Anyhow I believe you havce already been informed that the current collab isn't open to more Users now. Sorry you couldn't be a part of it. However I still encourage you to drop by and post your fanon if you so desire. We're a very active anhd inclusive community, so it won't be long till you find someone that wants to collaborate with you. Feel free to hang out whenever you like. I am your master! At your service. (talk) 15:46, July 14, 2014 (UTC)

I would love to join in with the rp. I've read a fair portion of what's there and it seems a fun idea, and I'm sure I'll find someone for my retinue. Oh, just to clarify; the RP is based on Rogue Trader 1987, the first edition of 40K, and not the modern RPG, yes?

Hi ZiXIS. It's Amy, sorry I'm having computer troubles at the moment and so probebly won't be able to reply on the RP until wednesday or thursday. Sorry again.

Eh, nah, Im not all too bothered with joining, thanks anyway though.

I'm sorry Zixis but I'm against excluding people until I'm absolutely one hundred percent sure the situation cannot be helped. I will talk to him about this and if he doesn't comply, then I will exclude him. I believe in peaceful solutions and solving things before passing judgement on others permanently. (Sort of bad thing that happened to me on other wikis and I'm not going to be a hypocrite by becoming what I fought against.)

However, I will give him this stern ultimatum nevertheless. I do agree that he needs to understand this isn't a big Imperial Guard battle roleplay and more of a character development one. Trust me I have seen roleplays that often get derailed because someone wants to be the best, strongest, or have the most technology. I shall give him a calm and civil, yet stern and clear warning. If he doesn't heed it then I have but little choice in the matter.Jaredthefox92 (talk) 23:27, December 7, 2014 (UTC)

Ohh. I like that idea :) Being a Rouge trader sounds fun. I have read a little of the books, but I've read all about them so I don't think I'll have too much trouble creating a character :) AmyTheStray (talk) 20:52, February 5, 2015 (UTC)

Hi Zixis :) I'm sorry I never replied on the RP thread. I've been very busy and haven't really had time for internet stuff. I'm not sure I really want to be in the Inquisitor RP. It would be fun, but I've never really found the Inquisition that interesting and wouldn't want to stop half way through and ruin it for everyone else. But thank you for inviting me :) AmyTheStray (talk) 05:56, June 4, 2015 (UTC)

Sorry for the delayed response Zixes, hadn't checked my talk page in a bit. If you're interested in starting a roleplay here you should look over our roleplay policy. If your proposed roleplay meets the criteria and whatnot drop a message on my talk page.--Victory is to survive and death is defeat! 04:20, November 30, 2016 (UTC)

Thanks for the advice and tips on character intro.

As to why the White Scars, well, I'm trying out the way of the V Legion so that I can come out with another fanon Space Marine Chapter based on the V legion lineage. Whether I will make it or not depends on how well I play my RP Character.

Hope that Clears your question. Once again, thank you for your assistance.

Oh I just meant someone familiar with criminal elements, unless you HAVE done jobs in the Periphery, which is also helpful. StrangerThings (talk) 21:28, July 7, 2018 (UTC)

Yes, Maxus would know where the Last Gasp is. You're specifically looking for a down-stack (meaning a bit of a ritzier location here in Zephyrus) bar with a with a neon sign depicting a massive pelagic creature. StrangerThings (talk) 22:40, July 20, 2018 (UTC)

No. My discord username is Imposter☭0☭#8677 if you need to PM me.

Retrieved from "https://warhammer40kfanon.fandom.com/wiki/User_talk:Zixes?oldid=265382"
Community content is available under CC-BY-SA unless otherwise noted.