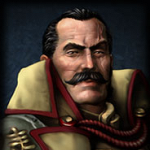 In answer to your question Reinno, I don't really know. I have looked at your Iron Praetorians article, and the font is nothing like mine. All I have done is used the default font. Did you start out your article with a blank page or with the standard set up?

The standard Set up.

Hi, Reinno. I was reading the Iron Pretorians page, which I love by the way, and saw the marine in the infobox and though he could do with a little redecorating. I also noticed you hadn't mentioned a Chapter symbol, so I was mucking about on Photo Shop and created these, which you are free to use if you like. I couldn't resist, the idea of tech-Romans is wonderful and there are far to few purple themed Chapters. Well, I hope you like them.

Heya I was just poppng up to ask if AmytheStray, Spawn and I could borrow a member of the Iron Praetorians for a Deathwatch Kill Team, sound cool? --LordReaper (talk) 08:34, July 12, 2014 (UTC)

Cheers, if you want more of a say in your character check out the page Kill Team Zero

Hi there. I'm sorry that has taken me so long to get back to you. You had the ill fortune of messaging me while I was on vacationm and did not have access to a computer. Anyway has your issue been resolved since you last messaged me? If it has is there anything else I can help you with? I am your master! At your service. (talk) 15:49, July 14, 2014 (UTC)

Oh the problem was solved thanks to NecrusIV, AmytheStray and a whole lot of others admin. Thanks anyway for your kind consideration. Reinno (talk) 16:09, July 14, 2014 (UTC)

Regarding the IPs I can work with that-have  an idea of them fording a river,vehicles thundering along,not slowed down at all by 3 meter deep water, firing the whole way, laying waste to Amphra defenses on the other sideBrowncoatMando (talk) 03:42, November 10, 2016 (UTC)

Hey- wrote that section with the armored unit and the river to the xenocide a while back, you may also want to add it on your side of things in the IP articleBrowncoatMando (talk) 05:54, December 1, 2016 (UTC)

I realize its a bit rough, been working to give Things something to work from  think you alone could do your Chapter justice but wanted to inform youBrowncoatMando (talk) 16:06, December 1, 2016 (UTC)

Iron Praetorians in the Solar Rampage

Hey, were you still interested in involving the Iron Praetorians in the Solar Rampage? Cheers, IllumiNini (talk) 01:44, December 27, 2016 (UTC)

RE: Help On the Way!

Getting ready for the new RP

Hi Reinno. I just saw your post again, and thought to myself maybe I can help you get better into-character? I hope that you do not mind, I just want to help.

I got this from the deathwatch role play book called First Founding. I hope that you will find it useful:

Some have made the error of assuming the savage sons of the wild steppes to be crude in manners or unsophisticated in temperament, but this perception could not be further from the truth (and voicing it would be unwise in any case). White Scars Battle-Brothers are complex individuals, and the product of a heady cocktail of their environment, tribal tradition and Adeptus Astartes doctrine, training and genetic engineering. Many regard the trappings of civilisation with a measure of suspicion. They would far prefer to commit the wisdom of the ancients to mighty stone tablets than within crystal data-stacks for example. Many of the teachings of the Primarch are set down in this way, the permanence of marble far outweighing the convenience of mass storage. When confined for long periods in an entirely artificial environment, many White Scars become short tempered. The older and more experienced, however, have mastered themselves to such a degree that they can enter a restorative trance and meditate for days on end on the wildness of Chogoris and emerge at peace once more.

In character, the White Scars display a finely balanced mix of wildness and discipline. They are often dour, even severe, and suffer fools with poor grace, yet they are supremely honourable and have a highly developed sense of justice and tradition. Once at ease, a White Scars Battle-Brother reveals himself to be capable of humour and kindness. They are thorough and considered in planning any deed, and when the time comes to unleash the fires of battle they do so with savage abandon.

At some point in his life, every White Scar must face and master the full implications of his own power. The wildness within, when combined with the potency granted by the Space Marines’ genetically enhanced physiology is a fearsome weapon indeed, and one that can be as harmful to the subject as to his enemies. Each time he draws upon his ferocity in the heat of battle, the White Scar takes a step closer to the precipice, beyond which lies the damnation of bloodlust and killing for the sheer sake of it. Worse, the line is invisible until almost crossed, and so the Battle-Brother must exercise prodigious willpower not to exceed it inadvertently. While the vast majority recognise the line when finally it becomes visible and in so doing gain unprecedented mastery of themselves, some do not. Of these, the White Scars never speak, and their names are hewn from the tablets for all time. It is one of the tasks of the White Scars Librarians, whom the Chapter calls Stormseers, to guide the Battle-Brothers in this journey, whatever its destination.

By the way, why did you chose the White Scars? I am curious. I chose the Raven Guards because I like the whole stealthy black-ops speciel forces trait that they have. Furthermore, they have the thing that they like to work alone and adapt to every situation while fighting behind the enemy's lines. Which I find pretty cool.

Starting work on a new RP

Hey Reinno, I'm starting work on a new RP. Wondered if you'd be interested in joining?

Retrieved from "https://warhammer40kfanon.fandom.com/wiki/User_talk:Reinno?oldid=262135"
Community content is available under CC-BY-SA unless otherwise noted.