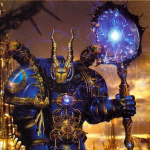 Hello, As you Know I am Supahbadmarine. I am 24 years old and hail from the great state of Ohio(Not really that great). I am addicted to Warhammer 40k background.

I do not play the game myself. I am just not a dice roller kind of guy. The thing that got me hooked was the amazing background.

I first became aware of Warhammer back when they started working on Warhammer Age of Reckoning. I had happened to stumble across it's site and it looked interesting. From there I decided to look into Warhammer Fantasy Battle and by extension I ran into 40k, which I instantly fell in love with.

Well one thing lead to another and here I am. Now about me. I am still relatively new to the site so I don't know all the tricks yet though I do my best. I am always looking for new and interesting background on 40k, and my knowledge is slowly becoming encyclopedic. I am also into any other fantasy of Sci-Fi series that is well done so don't be afraid to mention new stuff to me.

Another interesting thing about me is that I am an avid follower of Tzeentch, you have been warned. Don't worry, I will hide my megalomania and keep a polite facade while on the site. This will lull you all into a false sense of security so that you all don't see it coming when I take over this site and your minds. You may think that it is foolish of me to reveal my plan, but you knowing about it is part of said plan(wrap your head around that).

I am now also a member of TESfanon. It was only natural that this would occur as I have always loved Elder Scrolls. Over there I am a follower of Boethiah. (Please don't tell Tzeentch!)

I do however have some sympathy for new users and if anybody needs help getting started please ask. Also please ask if you need help with any original ideas. I always have 100 unused ideas bouncing around in my head like Daemons and if my input can help someone, I am more than glad to offer it. I will usually be among the first to offer constructive input on a new article. If it seems like I am attacking your article, please understand that however malicious it seems, I am honestly trying to help. Feel free to ask me to use some of my material in your work if you like it. Trust me I will be flattered as I consider other people using ones work as the highest compliment.

Along with my many works i also have a Sandbox that i like to mess around in, and throw sand into the yes of the other kids. It can be located here.

The Many Names of Supah

Thing people call me by:

As of now I have decided to collect the patronage of my own pantheon of gods. Essentially I intend to become the champion of a specific deity within each setting that I get involved in, creating my own pantheon. If people would like to offer any suggestions I would be happy with that. I prefer evil, or at the least frowned upon patrons that favor the ambitious and clever.

Current members of the Pantheon include:

Please note that these guys do not get along. You put these guys in a room with one another and I imagine things will get ugly. So please don't tell any of these guys about this pantheon. If you meet one of them then I follow only them, got it. Otherwise it might be my head.

This is what you should listen to when thinking of me.

Amongst the many who work on this site there are many who call the Supahbadmarine their ally. As such they are given access to my prodigious mind in support of their projects, and vice versa. Here are but a few of these superior individuals.

There are probably more than the ones I have mentioned, but my memory can be faulty. This is primarily because Tzeentch won't stop whispering in the back of my head. SHUT UP!!!!

The names of my enemies are a secret. That is because all of my enemies think that I am their friend. The fools! Their guards are down, so they will never see it coming. Hehehehehe!

Feel free to add quotes to the About section. Don't be afraid to be honest. I'm tough. In the worst case scenario I go cry in a closet for a few days.

—Supah temporarily serving Khorne in The Adventures of Ulgrugamazekz.

"You are all my puppets. You just don't know it. However I just told you, so now you are aware. However that is also a part of my clever manipulations. You will now try and deny me my supremacy, but that only serves to further my scheme. Do you understand fool? I have predicted every move you, or I will make before it has happened. I am unstoppable. Well, at least until Tzeentch screws me over like always."

"I have conquered this planet! My plans worked perfectly, even when they didn't make sense. Now all of you will bow to M-(BANG)... Ugh... TZEEEEEENTCH!"

—Supah being randomly struck by a meteor in the middle of a victory speech.

"He is, you know, like this Supah awesome guy!"

"He once manipulated me into snorting a milkshake without him knowing."

—Legionaire22, telling why he snorted a milkshake

Retrieved from "https://warhammer40kfanon.fandom.com/wiki/User:Supahbadmarine?oldid=175896"
Community content is available under CC-BY-SA unless otherwise noted.