View source
This article, Red Hand, was written by Kephn. Please do not edit this article without their explicit permission.

This article, Red Hand, is still being written. The author, Kephn, apologises for the inconvenience.

Stained the sinner's red.
Beholden to None.

'Vindication is nothing before Death!'

"Nostraman you may be, but you are no Night Lord. You are prey."

Beginning existence as the 7th Company of Night Lords under chapter master Deimos, the warband of Night Lords that would become the Red Hand are unique among members of the Eighth Legion in that they openly reject the Night Haunter, or indeed worship of any god or any kind of purpose beyond their own personal glory and the Long War against the Imperium. Because of this, all members of the warband ritually stain their gauntlets Sinner's Red, earning their nickname and rejecting any kind of reconciliation or understanding behind the Primarch's vision or wishes. In Nostraman gang lore, the Red Hand is a mark of death, tattooed to those who had duty to perform before they are executed, but the tradition is twisted by this warband, who brand themselves 'guilty' as a rejection of those who would rule and judge them.

"I was never a son to you or your Emperor. Plead to him now as you die."

For centuries, the Sons of Deimos would wander in and out of realspace and the Eye of Terror, attacking Imperial Worlds for fun and profit. Deimos was a good pirate, but he lacked the ambition of other Chaos Lords, and despite living in the heart of the Ruinous Powers, refused to embrace any of them, instead seeing Chaos as something distasteful, and to be avoided. This all changed when Deimos picked up a vicious, almost feral child noble, Azhmari Vulkyr, from the Feudal World of Ubervald. Vulkyr had been originally intended as a tithe to the Raven Guard, who defended the system, and was thus denied the pleasures of the noble life and viciously abused by his Redemptionist father. After murdering the royal family and offering the world up to Deimos, Vulkyr would be inducted as a Night Lord and would serve as the warband's champion, along with Kulstov, a vicious serial-killing raptor, who became his rival.

Vulkyr quickly made an ally with the warband's captive Sorcerer, Al-Zharad, who hung from chains in the navigator's chamber, guiding the ship through the Empyrian, and slowly became more acquainted with the Ruinous Powers, acquiring a true Daemon Sword and becoming a champion of Chaos Undivided. This caused a rift between Vulkyr and those of 7th Company who wished to use Chaos as a weapon against the Imperium, and the more traditional inner circle of Deimos. Vulkyr fought Deimos one on one, proving before the entire warband that he was not a slave to Chaos by striking the final blow with Deimos' own thunder-hammer, and thus denying his former commander's soul to the Daemon in his sword. In doing so he proved that Chaos could be used as a tool, and ascended as the leader of the newly-christened Red Hand.

"The only gods here are murderers, my brothers in arms, and all anyone else can be are victims."

The Red Hand strike like any other Night Lord warband, descending with virtually no warning, attacking without mercy, and vanishing with no trace. The difference is, the Red Hand fully embrace the power of Chaos to spread terror, and will often employ strikes with Daemons, sorcery and mutants in order to cause fear and disorder in enemy ranks.

Interestingly, while the Warband embraces Chaos as a weapon, they are very distrustful of people who fully embrace subservience to another being, be it a Chaos God or the Emperor. As such, the Red Hand will often attack Shrine Worlds, and even other Chaos warbands in for resources and artefacts, seeing the more devout as no different to Loyalist scum. They also tend to erect mock shrines of worship to the dark gods in order to bind Daemons into serving them, often with subtly ironic or intentionally incorrect iconography, which also confuses those who investigate the aftermath of their attacks.

Oddly enough among Night Lord warbands, the Red Hand actually treats humans who reject the Imperial Faith with a certain measure of respect, and the favored slaves of the warband have their hands tattooed Sinner's Red as well, as a mark of protection. 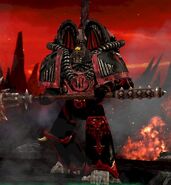 Raptor Champion of the Red Hand 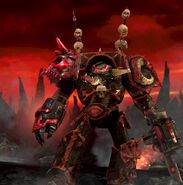